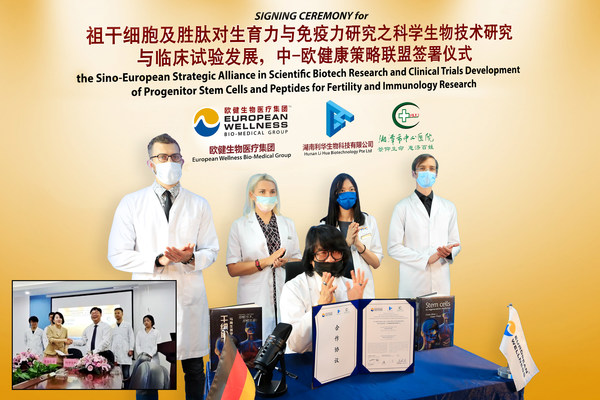 The later phase of the strategic venture focalizes on providing education to researchers and local medical practitioners in China, particularly in the specialised subject of bio-regenerative science as well as clinical protocols and best practices in stem cell transplantation.

National Bureau of Statistics of China revealed that China’s birthrate has drastically decline in recent years with only 12 million babies born last year compared to the 18 million born in 2016 (the lowest number of births recorded by China since the 1960s).

“Although in-vitro fertilization (IVF) is a popular option among Chinese couples, it may not always work. The likelihood of IVF success deteriorates after the age of 35,” said Prof. Dr. Mike Chan.

“This is where organ-specific precursor stem cell therapy may be of service as it targets the regeneration of specific organs linked with the pathophysiology of infertility. This is achieved through non-invasive transplantation of a variety of precursor stem cells originating from the pituitary, adrenal gland, liver and the gonads.”

His sentiments were shared by Prof. Tham, China’s renowned gynaecologist with specialisation in IVF and a prominent stem cell scientist since 2005, who believed that this alliance signifies the convergence of great intellects from the East and West in this emerging scientific sphere.

“With China’s three-child policy announced in May 2021 to address the ageing population problem, European Wellness as a pioneer and leader in stem cell therapeutics is indeed a worthy partner to collaborate with and address the escalating demand for non-invasive fertility therapy in China.”

European Wellness Biomedical Group is an award-winning European group founded in 1991 in Switzerland through the culmination of early cell therapeutic research efforts spanning across Switzerland, Germany, Russia and Austria since the mid ’80s. Today, the Group is most renowned for its pioneering developments in precursor stem cell therapeutics, biological peptides, biological regenerative medicine and immunomodulation. The Group’s multinational business divisions include research and development, bio-manufacturing, medical academy and education, anti-ageing centres and product distribution to practitioners and consumers across 80 countries. The Group also owns a growing network of 26 internationally accredited Wellness Centres globally. Today, the Group is headquartered in Germany and Kota Kinabalu, Malaysia (Asia Pacific) with research facilities in Germany, Switzerland, Czech Republic and United Kingdom.

Read about their exciting new partnership: