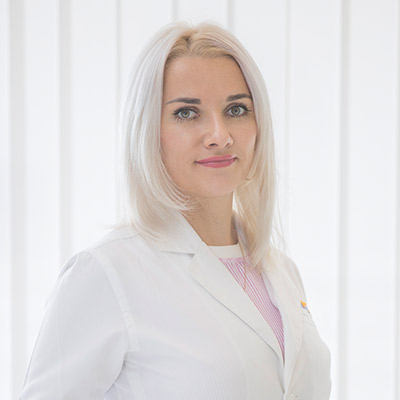 Dr. Margaryta was previously engaged as an Ultrasound Specialist at a private clinic in Russia. While she was in clinical practice, her subspecialisation was in Sonography which was focused on the heart, soft tissues, lymph nodes, thyroid gland, liver, gallbladder, bile ducts, pancreas, spleen, abdominal aorta, breast and urinary tract. She also served as a Gynaecologist (Outpatient Care Specialist) at a private clinic in Ukraine, at the Sukhodolsk City Women’s Consultation Clinic and at Luhansk City Hospital No.3, where her focus was on prenatal and postnatal care, diagnostics and treatments of diseases related to female organs – i.e. infections of the cervix, ovaries, Fallopian tubes, endocrine pathology. In that role, she also specialised in Colposcopy and Gynaecologic surgery and was also attached as a midwife at the Maternity Department in Luhansk City Hospital No.3.

Dr. Margaryta speaks 4 languages – English, French, Russian and Ukrainian and has worked in several major cities across Europe before coming to Asia for new opportunities to expand her practice in the field of Aesthetics, Anti-Aging and Regenerative Medicine. She is part of the Medical Advisory Board for the international chain of European Wellness Centres and is also a Board Member of the International Association for Cell Therapy (Switzerland) and the International Association of Stem Cell Transplantation (USA).

Dr. Margaryta: Regenerative Medicine as a safe and effective treatment for Hormonal Imbalances

I am the footer call-to-action block, here you can add some relevant/important information about your company or product. I can be disabled in the theme options.
Get In Touch
Copyright European Wellness. 2022 - All Rights Reserved
Back To Top
×